Items you need to update

Each RAMPS 1.4 board is placed onto an Arduino Mega controller. When you install Klipper you will flash the Klipper code onto both Arduinos. We need to find the USB paths of your Arduinos and tell Klipper where to find them on startup.

You can do this two ways - by-id or by-path. by-id uses the unique serial number of your Ardunios to identify them. by-path uses the physical location of the USB port on your pi. It is preffered to use by-id, however if you decided to use a cheap clone they often do not have a serial chip installed - in this case you must use by-path and then be careful to always plug the X MCU and the Z MCU into exactly the same port on the pi if you ever need to change your wiring.

You can find out the serial id using the following command in an SSH terminal:

These are the ID's we need to insert into the config file. To determine which Arduino is which it is easiest to plug in the XYE Arduino first - do the 'ls' command - and then plugin the second Arduino and grab the second ID using 'ls'.

If you only see one listing when you have two arduinos connected - it is likely you do not have serial chips:

In this case you need to check /dev/serial/by-path/ It is a good idea to unplug any USB webcams or any other USB devices while you discover which port is which.

You then use these values in the config - note the change from by-id to by-path:

Danger If you use by-path you must always plug the same Arduino into the Same USB port. Plugging it into a different port will change it’s path, possibly flipping your MCU X with MCU Z

In this section you set your maximum accelerations and velocity. The stock config is confgiured fast - so if you are facing issues - you can tweak these values lower and then increase them as you finish tuning your printer. These are the highest values that klipper will allow regardless of what you may have configured in your slicer.

Square corner velocity is defined as:

The maximum velocity (in mm/s) that the toolhead may travel a 90 degree corner at. A non-zero value can reduce changes in extruder flow rates by enabling instantaneous velocity changes of the toolhead during cornering. This value configures the internal centripetal velocity cornering algorithm; corners with angles larger than 90 degrees will have a higher cornering velocity while corners with angles less than 90 degrees will have a lower cornering velocity. If this is set to zero then the toolhead will decelerate to zero at each corner. The default is 5mm/s.

X and Y steppers (A and B drives)

In the stepper_x and stepper_y section you will define your steppers for the A/B drives on the gantry.

It is useful when first configuring to test that you have the motors plugged in the right place on the ramps using the stepper buzz command.

This will move each motor back and forth a few times. If you have the motors the wrong way around - you can either power off and switch the connections on the RAMPS board - or switch all the PIN definitions in the config to effectively 'swap' the motors.

Next you need to check the movement. To begin with you do not want to run a home sequence as your motors might be moving in the wrong directions. To test direction - manually move the toolhead near the center of your bed. Then run the set_kinematics command to force the printer to the location you are at.

Now you can use the jog controls in Octoprint to move the toolhead in X and Y - just use small moves here.

This diagram can help with troubleshooting the directions of your motors.

If you need to swap motors or change directions you can physically swap the connectors or make changes in config. To invert the direction of a motor in the printer.cfg file - add or remove the '!' in front of the dir_pin definition. Run a RESTART command to load the new configuration.

Once everything is moving in the right direction you will want to configure your endstops. Voron homes X/Y to MAX in the top right corner. 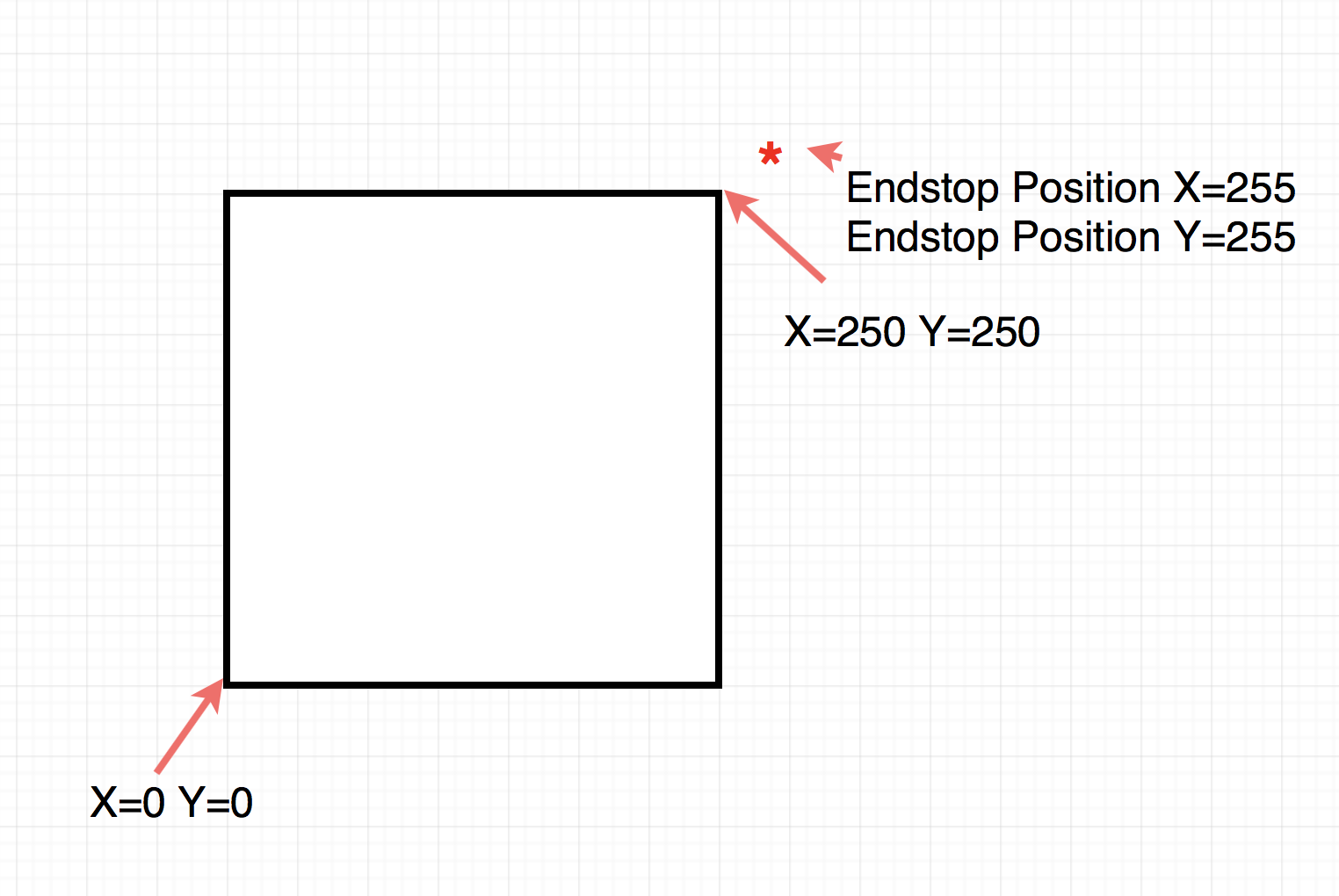 If you have a larger build than 250x250 - adjust these values accordingly in both stepper_x and stepper_y:

First you should check that the toolhead can actually reach the switches without interference. Use the set_kinematcis command and slowly jog the toolhead to the right and confirm that you can hear the X endstop switch clicks at X-Max.

Now do the same moving the toolhead back and confirm the Y endstop switch clicks at Y-Max. Y in particular you need to check that your wiring chains are not interfering with the movement at the back of the printer. Also - you may find that the rear left of the gantry hits the back before the rear right reaches the switch - this means you are not square and you need to adjust the belts in the x-carriage. (See mechanics)

If query_endstops returns 'TRIGGERED' when you are not pressing the pin and open when you do press it - invert the endstop_pin by adding or removing the '!'. You may wish to confirm your switch is wired as you intended. Usually that's normally closed.

If the state does not change when pressed - you need to check all your wiring and confirm that you are plugged into the correct endstop pins on the MCU X/Y board.

Now we will do the first homing sequence. Get the toolhead near the center of the bed and raise the gantry high so you have time to stop it if something goes wrong.

As the toolhead moves right - manually press the X endstop switch twice to stop it.

As the toolhead moves back - manually press the Y endstop switch twice to stop it.

As the gantry moves dowm - manually press the Z FSR endstop switch twice to stop it.

Once you are happy that the movement is stopping when the switch is pressed - run G28 again.

This time let the toolhead move to X and Y endstop automatically.

If you find that X=0 is not far enough to the left - increase position_endstop and position_max accordingly - decrease it if you are going past the side of the bed.

Do the same for Y=0 - you will want this as far forward as possible so that the toolhead can reach the FSR pin at the back of the printer. You may need to move your bed forward a little to make this work.

You want the tool head as far to the front as possible without touching the front idlers when Y=0.

Now that you have X and Y endstops configured you can configure the position of your FSR pin. See Homing Override

Each of the four z steppers are controlled independantly by klipper. It is important that the steppers are wired and configured in the correct order in a clockwise direction starting with front left. 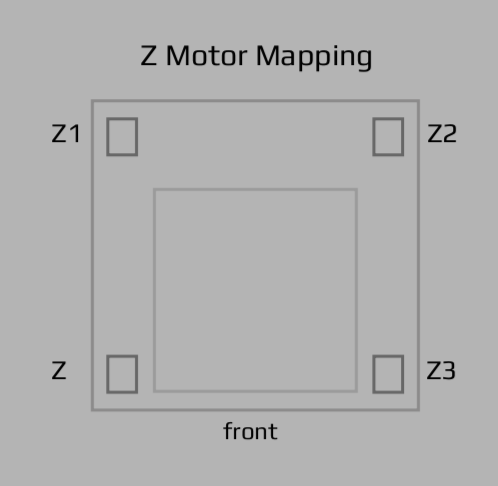 In the first stepper definition you will also set your FSR Z endstop position. 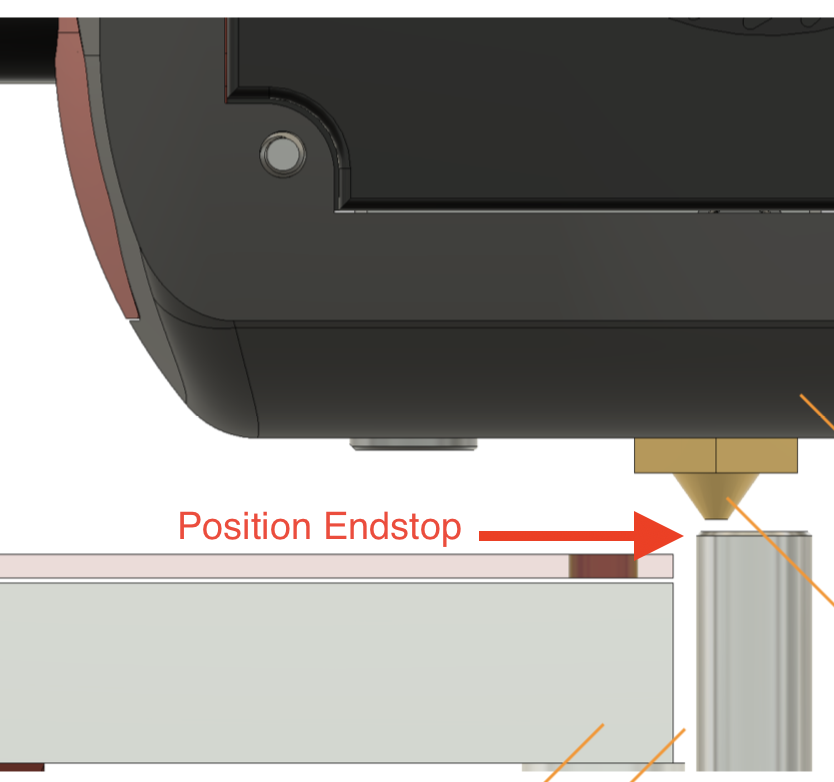 This tells klipper that when this switch is hit by the nozzle what the current Z position is (position_endstop). Some people refer to this as the Z offset which can be confusing - as it is the actual height of the nozzle when the switch is pressed. It does effectively dictate your z-offset but when adjusting this value - it is better to think of it as the distance the nozzle will travel to meet the bed. 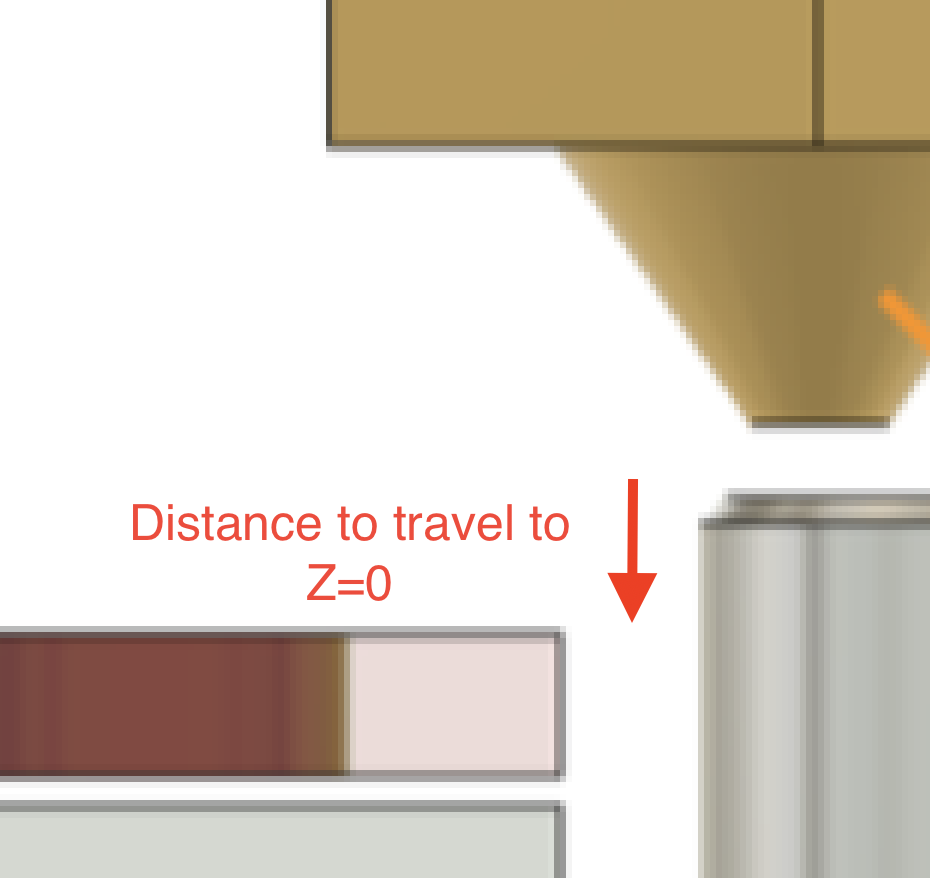 So when you increase this value - your nozzle will be closer to the bed - when you decrease it - it will be further away.

If your FSR pin head happens to be lower than the bed - you would set this to a negative value.

When first setting this value start with a low value and work up so that you avoid accidently crashing into the bed.

I also recconmend testing near the edge to begin with and then fine tune in the center when you are comfortable how the adjustments work.

position_max: determines the absolutle maximum height the Z will be allowed to move. If you try to move higher than this either manually or in g-code - you will get a move out of rnage error.

position_min: determines the lowest Klipper will allow the nozzle to go. This is a safety feature, but it is common to set this to a negative value so that you can baby step during a print below Z=0 if the enstop is configured slightly too high.

If query_endstops returns 'TRIGGERED' when you are not pressing the pin and open when you do press it - invert the endstop_pin by adding or removing the '!'

If the state does not change when pressed - you need to check all your wiring and confirm that you are plugged into the correct endstop pin on the MCU Z board.

Now you can check that the gantry is moving in the right direction. Start by using STEPPER_BUZZ and confirm each motor is moving and in the correct sequence clockwise from front left to front right.

Now we will confirm direction. Use set_kinematics to tell the printer where it is without homing.

Now use the Octoprint jog controls to move the gantry up. Use 1mm steps very slowly as if any of your motors are moving in the wrong direction the gantry will twist.

Watch each motor as you move up - if one of them is moving in the wrong direction - invert the direction by adding or removing '!' from the dir_pin setting.

Watermark is that just a basic threshold with on/off control.

Here you will configure the position of your FSR switch. You must configure your endstops before starting this process - as any changes to X or Y endstop position will move these values.

Manually move the nozzle directly above the center of your FSR pin.

Issue M114 to see current position of the nozzle

These X/Y value are what you will put into homing_override to move the nozzle above the FSR pin when homing:

Safe z home does not rehome X,Y when homing Z.

homing_override requires the gcode to home all axes before homing Z. Which means a G28 Z will result in all three axes being homed instead of just Z. 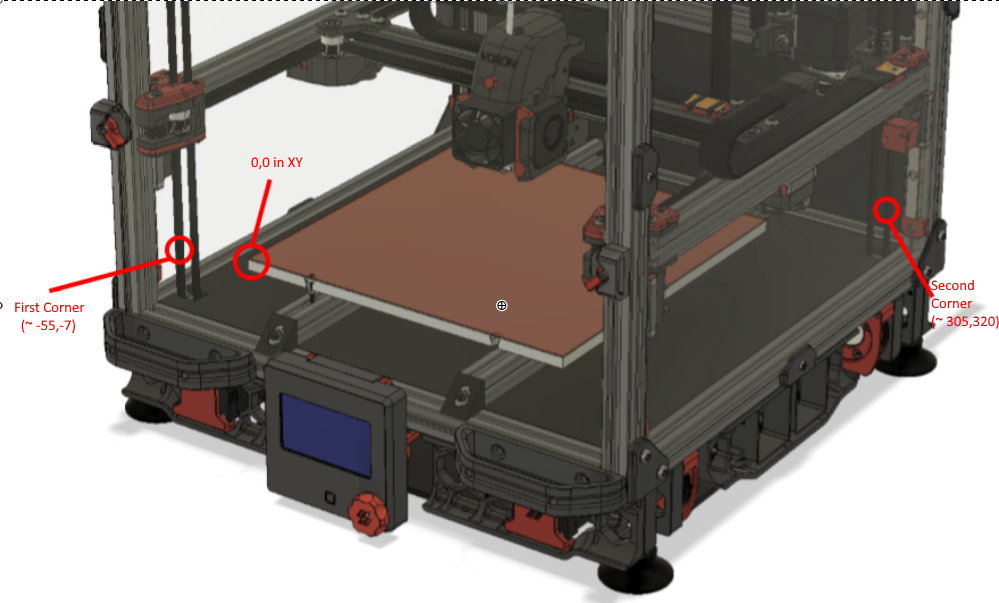 :::info The gantry corner and probe points are depended on your printer size.